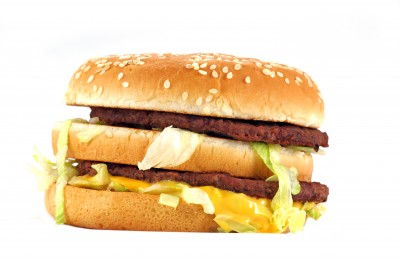 It’s no secret that a burger and fries from your favorite fast food chain is highly enjoyable—hence why the term “guilty pleasure” is often used to describe one’s feelings about drive-thru dining. However, in a study from St. Luke’s-Roosevelt Hospital Center and Columbia University, in New York, it was shown that tired people are aroused significantly more than the well rested, when viewing photos of unhealthy food.

By observing and tracking blood flow to the brains of 25 men and women in good health, researchers noted their stimulation from seeing good food and bad food. Next, the conductors of the study had their participants sleep 9 hours for five nights, and 4 hours for five nights. The tests showed that those who got less sleep were much more stirred-up when they laid their eyes on images of junk food.

The explanation for their intriguing findings is rather simple: when we are tired, we want calories, since that’s what we derive our energy from. Ergo, since bad food is very calorie-dense, our minds’ crave it, as a “quick fix,” for a lack of energy. But, it’s much healthier in the short and long term to keep things like nuts, cheese, veggies, and water around to provide that quick burst of energy you’re looking for.