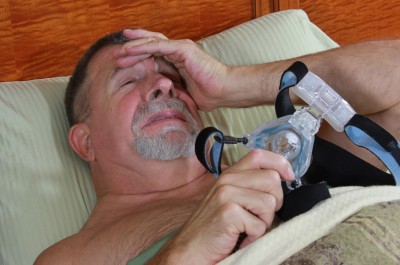 A very serious sleep disorder that affects an estimated 12 million Americans every night is called sleep apnea. Sleep apnea means that there are moments during sleep when breathing temporarily stops and starts back up again.

A person suffering from sleep apnea may stop breathing for 10 to 30 seconds at a time, and it can occur over 400 times a night. The breathing is often restarted with a snort or a choke. Men who are overweight or obese are the most likely to suffer from sleep apnea, followed by both men and women over 40. Some studies suggest that sleep apnea can be attributed to over-breathing, while the problem is that not enough air actually gets in the body. There are two kinds of sleep apnea. The most common type, obstructive sleep apnea, occurs when something obstructs the air flow during slumber. A less common type occurs when the central nervous system does not send the correct messages to breathe.

Sufferers are often encouraged to stop smoking, to lose weight, and to get more exercise if these things apply.  A device called a CPAP, or Continuous Positive Airway Pressure device, is often implemented and helps most people with sleep apnea. Sleep apnea can be very serious if left untreated.  All sleep disorders are also dangerous in that you are more likely to be involved in an accident if you are sleep deprived.