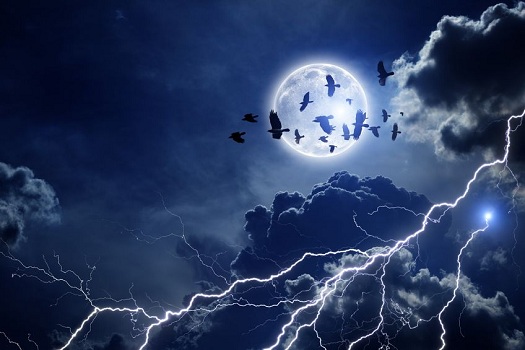 With the next full moon set appear on October 8th, it may time to make note of the folklore regarding the moon affecting our sleep.

Conducted by researchers at the University of Gothenburg in Sweden, a new study has found a link between lunar phases and sleep patterns. Using 47 healthy adults between the ages of 18 and 30, researchers found that they slept an average of 20 minutes less, had a harder time falling asleep and had more sleep disruptions during a full moon. On the other hand, a new moon was associated with 30 more minutes spent in REM sleep during the night.

Originally, the Gothenburg researchers were studying how noises affects sleep but, after looking re-analyzing their data, it was found that the brain is more sensitive to external disturbances when there is a full moon, namely the cerebral cortex. You can find out more about their findings in the June issue of the journal Biology.

There is certainly a need for more studies regarding moon phases as numerous studies have conflicting results. While the Gothenburg study confirms the results of a Swiss study on the moon and sleep last year, another study in Munich, Germany was unable to follow the same path. Even with more 1,000 volunteers and a total of 26,000 nights of sleep recorded, there wasn’t a link to be found regarding lunar phases.

Scientists just can’t come to an agreement how the moon affects our sleep nor why but, one thing is for sure, they won’t give up until this mystery has been solved. If you’d like to perform your old experiment, get out your sleep tracker and compared how you’ve been sleep now to the different phases of the moon next month!