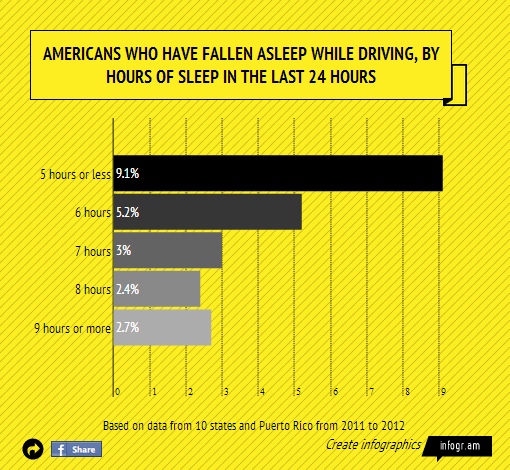 If you need another reason to get to be proper amount of sleep; this shocking info-graphic concerning drowsy driving might do the trick. Provided by The Huffington Post and based off data gathered by the Centers for Disease Control from 2011 to 2012, it shows just how many people are affected by poor sleep and the likelihood of falling asleep at the wheel.

92,102 in 10 states and Puerto Rico were asked about their sleep and if they had fallen asleep while driving in the last 30 days. Among the people who said they had poor sleep for 2 weeks or more during the last 30 days, 6.2% of them admitted to falling asleep while driving during that same period, compared to only 3.2% who slept well and still fell asleep behind the wheel.

Other interesting finds in the report included:

-Binge-drinkers were more likely to report driving while sleepy than those who did not engage in binge drinking or did not drink at all.

-6.6% of people who reported that they sometimes, seldom or never wore a seat belt also reported drowsy driving, compared to 3.9% of those who always or almost always wore their seat belt.

Since drowsy driving is responsible for 1 in 4 fatal automobile accidents every year, it’s important that you are aware of what you can do to reduce the number and be safe.

Symptoms include, frequent yawning or blinking, missing exits, not being able to recall the last few miles driven and drifting in your lane. Be sure to always get the proper amount of sleep before hitting the roads and pull over when you recognize symptoms of drowsy driving.