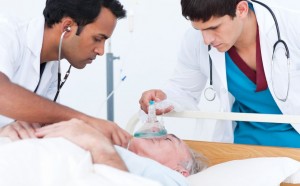 It’s important to recognize that sleep apnea could develop after other serious health conditions.  A new study was just presented at the 2014 American Thoracic Society International Conference, pointing out that sleep apnea may be common among patients who have survived acute respiratory failure.

Involving 21 patients with acute respiratory failure, which was defined as dependence on mechanical ventilation for at least 48 hours, the study aimed to understand factors that may contribute to insomnia as well as sleep apnea.

The majority of those examined using polysomnography tested high on the RDI and AHI assessments, indicating a reduced level of oxygen flow and met the criteria of being diagnosed with sleep apnea.

In regards to the study results, author Dr. Elizabeth Parsons, of the Division of Pulmonary & Critical Care Medicine at the University of Washington, in Seattle, says, “It is important to note that trauma was the inciting event for acute respiratory failure in 57% of our tested subjects. By subject report, 29% were actively taking an opiate pain medication at the time of testing. Opiates can worsen sleep apnea by reducing upper airway tone and central respiratory drive. Our results suggest that sleep apnea is common after acute respiratory failure, with central-acting medications serving as one potential contributor.”

If you have recently undergone any type of trauma, have a serious health condition, find that you are waking up frequently during the night or simply don’t though refreshed in the mornings when you wake up, there is no harm in getting tested for sleep apnea. Discuss any sleep issues with a licensed physician or sleep specialist as soon as possible.

Napping: Why, and How You Should Do It
Poor Sleep Linked to Poor Academic Performance in College