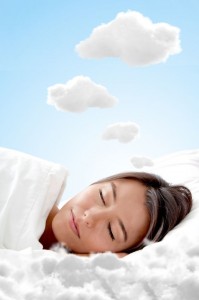 What if you could create your perfect dream every night? The age of dream control may be sooner than you think with the results of a recent 2-year long dream study.

In 2010, Psychologist Richard Wiseman from the University of Hertfordshire worked with app developers YUZA to create “Dream: ON,” an app for iPhone users that monitors a person as they sleep, and plays an intricate crafted ‘soundscape’ as they dream.  The soundscapes were designed specifically to evoke pleasant dream scenarios such as lying on a beach, or taking a walk in the woods. The app also included a soothing alarm to remind the user to submit a description of their dream.

With the app being downloaded more than 500,000 times, the researchers were able to collect millions of dream reports. The dream reports showed that the soundscapes did have a significant influence over people’s dreams. For example, if someone chose a beach soundscape, they would more likely dream of sun or the ocean. In contrast, if a person chose a nature landscape, they would most likely dream of flowers and greenery.

The researchers also discovered that more bizarre dreams were being reported around the time of a full moon. This secondary discovery strengthens the findings of a 2013 study that linked the full moon with disturbed sleep patterns.

Having positive dreams is said to help you wake up in a better mood, and be more productive throughout the day. This new way of dream control may also be the perfect therapy for people suffering from psychological problems, such as depression. How likely are you to try the Dream: ON app? Or, if you already have tried it, we’d love to hear about your experience in the comments!

Need a Nap? Try Taking One In A Hammock
Reasons Why You Can’t Get Enough Sleep