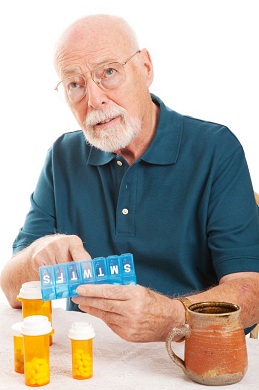 It’s no secret that as we age, great night’s of sleep become harder to obtain. Aging patients often turn to prescription medication to help with sleep problems, panic attacks and anxiety. However, The Washington Post has the results of new research that suggests that the long-term use of these medications increases their risk of developing Alzheimer’s disease.

Benzodiazepines are marketed in commonly prescribed brands such as Valium, Ativan, Klonopin, and Xanax. The Alzheimer’s risk is up 51% higher among elderly people who use benzodiazepines for at least 3 months, based on data from Quebec’s health insurance program.

Published in the British Medical Journal last month, the study is the result of teamwork from researchers in Canada and France. 1,796 Alzheimer’s patients who were at least 66 years old, lived in Quebec, and were covered by the Quebec’s drug plan between 2000 and 2009, had their data reviewed over the course of 6 years. All of the patients used benzodiazepines for at least 5 years before they were diagnosed with the neurodegenerative disease. The Alzheimer’s patient’s information was then compared to 7,184 control cases.

The link between benzodiazepines and Alzheimer’s appeared even stronger with longer duration of use or longer-acting benzodiazepines, confirming the results of 5 previous studies regarding the same topic.

Researchers are encouraging physicians to use caution in prescribing medications to their patients, doing so as a last resort. Many are now turning to more drug-free treatments such as meditation, yoga, light therapy and cognitive behavioral therapy to battle sleep, pain and some forms of mental illness such as depression.

What Time Does America Tuck In?
Driver Exposes the Truth About Truckers and Drowsy Driving