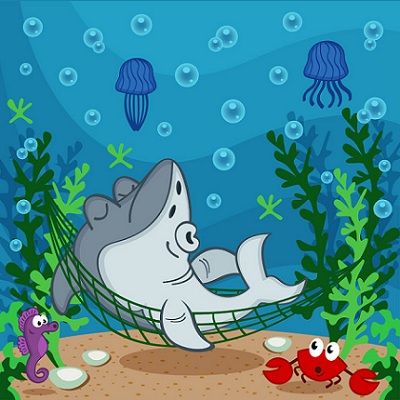 Are you ready to kick off Shark Week 2015?  In honor of our obsession with of sharp teeth and super senses this week, we couldn’t help taking a look at how sharks get enough snooze to have the energy to stay on the hunt.

For many years, biologist believed that sharks went without sleep due to their need to keep moving to allow water to pass over their gills to get oxygen for breathing, a process called “ram ventilation.” However, with more than 450 known species of sharks and more being constantly added to the list, it was only a matter of time before we discovered that all sharks weren’t created equal in terms of their sleep necessities.

Over time, some sharks developed spiracles, a tiny opening located behind their eyes that can be used to push water through their gills so that they can lie still and enjoy some must needed rest. Other sharks don’t have the luxury to remain motionless, so these hunters perform at act called by many, “sleep swimming.” As they swim very slowly, the sharks’ brain becomes less active to allow for maintenance and recharging, but they never reach a deep sleep. Unlike us humans, the brains of sharks simply alternate from being active to less active.

Standouts in the shark community include the white tip reef shark, which definitely seems to practice a great sleep hygiene routine and maintaining a comfortable sleep environment. These social sharks are known to return to the same location for snooze and cuddle together in a line. Also deserving a mention is the sand tiger shark, which has the ability to gulp in air to maintain its desired buoyancy to keep moving as it hunts and gets some shut-eye.

While not all animals actually tuck in for sleep, all brains need rest at some point. Take a bite out of serious health risks, memory loss, low energy and poor productivity by making sure you get 7-9 hours of snooze each night. Your competition won’t know what bit them!