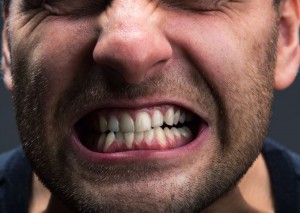 While the occurrence of grinding teeth is not new, it is only recently that we have come to understand why it occurs, particularly during sleep.

Teeth clenching or grinding, a behavior known as bruxism, is a common problem that can lead to broken teeth, enamel damage, headaches, and temporomandibular joint (TMJ) disorders. Bruxism is defined by The American Academy of Orofacial Pain as “diurnal or nocturnal parafunctional activity which includes clenching, gnashing, gritting and grinding of teeth.” Information on the prevalence of bruxism varies based on research criteria, working definition, population samples and clinical criteria. While everyone clenches or grinds their teeth at some point, it becomes clinically significant when it leads to tooth damage or other symptoms. In 2004, it was estimated by some researchers that at least 10% of the adult population engages in clinically significant nocturnal bruxism.

For many centuries physicians and dentists were perplexed as to the cause of nocturnal bruxism. However, now it is understood that a significant cause of this nocturnal behavior is airway instability during sleep, such as what occurs in Upper Airway Resistance Syndrome (UARS) and Obstructive Sleep Apnea (OSA). The upper airway largely is comprised of muscles and soft tissue.  As we fall asleep, muscle tone regulation changes, leading to relaxation of our muscles and the upper airway is largely made of muscles and soft tissue. Also, as we fall asleep, the tongue becomes less tense, regressing toward the back of the airway. The mandible, which is held in place by facial muscles, also has a tendency to retrude as those muscles relax. Since the base of the tongue is anchored to the mandible, this leads to further regression of the tongue toward the back of the throat. In individuals with narrower craniofacial anatomy, this can lead to significant upper airway resistance or obstruction during sleep. One possible defense against this process is to clench the teeth, holding the mandible in place to combat this retrusion and keep the airway more patent.

Clinical research has shown that treatment of obstructive respirations during sleep leads to improvement or resolution of nocturnal bruxism in many cases. It has been demonstrated that treatment of OSA with positive airway pressure (e.g., CPAP) has a high success rate of resolving nocturnal bruxism previously observed in affected individuals. The same trend has also been observed in patients with UARS.

If you clench or grind your teeth at night, wake up with headaches or TMJ pain, or you are wearing down your teeth, please see a sleep specialist. You may have restricted airflow during sleep, which could be causing cardiovascular problems as well.

Sleep Apnea Severity Connected to Death Risk
Is Your Job Hazardous To Your Sleep?