You are here: Home › Uncategorized › One Couple’s Rocky Road to Good Quality Sleep
By Gallery Furniture's Sleep Center on June 26, 2013 in Uncategorized 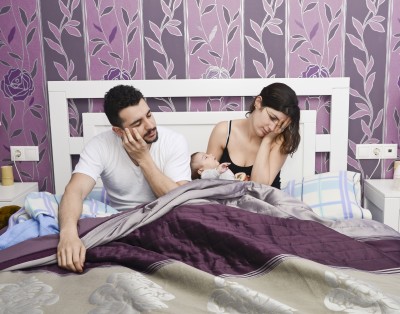 Many parents know the frustration that goes along teaching a young child to sleep on their own. Recent research has shown that there are not any long-term effects that stem from allowing the child to, “cry it out,” and get themselves to sleep. But, this is a difficult process for some parents to endure. Danielle and Marcello from New Jersey were having a particularly tough time getting their nine-month-old infant and two year old to sleep. So, they took their situation to professionals for guidance.

The couple described their sleep life, saying, “We just don’t sleep,” said Danielle. “We are up anywhere from three to six times a night with one of the kids.” Does this sound familiar? The tactics employed by Dream Team Baby, the consultants that helped them may surprise you. “A parent can absolutely do this by themselves,” said Connor Herman, one of the Dream Team Baby’s crew.

Next, they covered all of the windows to make sure that no light gets in. After that, the Dream Team put on white noise machine, to soothe the child. Lastly, Danielle and Marcello’s child gets put to sleep—and no one looks back. Their two year old woke up four times throughout the night, but the couple paid no mind.

While this process was difficult for them initially, it appears to have paid off. Two weeks later, their two year old sleeps 12 hours a night and goes to bed peacefully. “A good night’s sleep is a great, yummy, wonderful thing. And, that’s what you’re going to be giving your child. Then, it’s something to celebrate,” said Herman about their strategy to help finicky kids get to sleep.