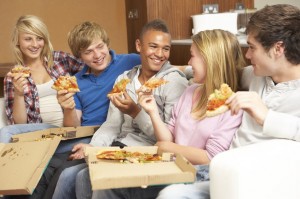 The difference between teenagers choosing pizza or a salad for lunch can be influenced by whether or not they got enough sleep the night before. At the annual SLEEP 2013 conference, research was presented showing that sleep-deprived teens eat less healthily than teens that are well rested. Sleepy teens eat more unhealthy foods and less of the foods that are good for them.

13,284 teens with an average age of 16, participated in the National Longtitude Study of Adolescent Health. 18% of the teens slept for less than 7 hours a night. Those teens were most likely to eat fast food more than twice week and, eat less fruits and vegetables throughout the week.

Maximize Your Sleep Potential Using Your Senses
Have Type 2 Diabetes or Hypertension? Get Tested For Sleep Apnea!