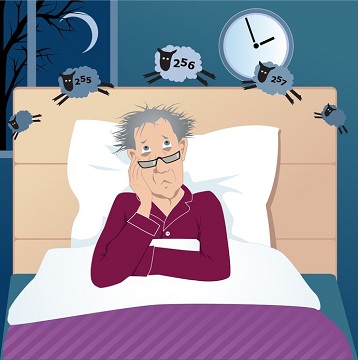 Sleep quality is just as important as how many hours you tuck in, and sleep disturbances do set you back. Men especially should take note of new research that suggests that sleep disturbances increases their risk of developing Alzheimer’s disease.

Published in the journal Alzheimer’s & Dementia, the study included more than 1,000 men who were 50 years of age when the research began, between 1970 and 2010. Each participant was re-examined at ages 60, 70, 77, 82 and 88 years. The sleep-related questions that were asked inquired about sleeping pill use, waking up in the middle of the night and difficulties falling asleep.

During the 40-year follow up period, self-reported sleep disturbances were linked to a 1.5 higher risk for Alzheimer’s disease, especially if the sleep issues occurred later in life.

In a previous study, lead study author and sleep researcher at Uppasla University, Christian Benedict and his team also found that even missing sleep for one single night increases the blood concentrations of brain molecules in young men that would normally rise due to acute brain damage.

High-quality sleep supports brain health, and the results further confirmed that it’s worth it to improve your snooze, especially later in life. It is more difficult to sleep as we age however, cognitive behavioral therapy and light therapy have been proven to be a great resource for anyone determined to collect on the benefits of shut-eye. Speak to licensed physician or sleep specialist as soon as possible to protect your health and boost your happiness!