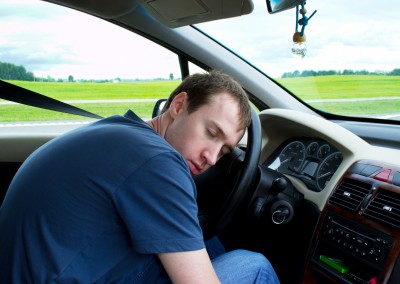 There are about 100,000 police-reported crashes in the United States every year as a direct result of driver fatigue, the National Highway Traffic Safety Administration estimates.  An incident in Japan involving a sleeping bus driver that killed seven people has spurred people to think about driving differently.

Automakers hope to use new technology to reduce incidents like these that can be attributed to thousands of deaths a year around the country and the world. The technology uses sensors to gauge how tired a person may be to try to wake them before they have an accident or even lose focus.

Toyota has released a system created by Aisin Seiki Co. on some of its models that uses a camera to monitor the drivers eyelid movement. If the driver’s eyes begin to droop, or look away from the road for too long, an alarm sounds to try to alert the driver.

Aisin Seiki is working on a new system that monitors the driver’s breath, heart rate, and can pull the car over safely if it can not wake the driver. Another company has a system that uses infrared technology to detect eye movements, which should detect drowsiness at an earlier stage than eyelid monitoring.

While it is not a replacement for a good nights sleep, technology can be implemented into our lives to help make them safer for the sleep deprived.  The fatigued and sleep deprived should not operate cars or other machinery because they may harm themselves or others purely by accident.